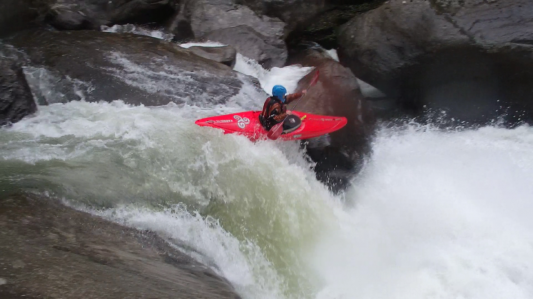 Just recently I accomplished a major goal of mine, to run the Green River Narrows, especially a rapid called Gorilla. Two good friends of mine helped with that. Jackson Kayak team members Hunt Jennings and Jeremy Adkins, rallied and ran it with me, my brother Brody, and three other people. Hunt knows the river very well, in fact he was soon to race it in an upcoming event. It was Brody’s and my first time down which both of us were very excited for. Jeremy hadn’t run the Green in about 10 years, so it was almost a new run for him as well. It was a great experience for all of us, and I can’t wait to do it again.
The Green is a river where anyone can have a bad day. I believe all of us, with some exceptions, were nervous. Our adrenaline was slowly rising as our blood flowed during the warm up rapids before the first of the ‘Big Three’, Go Left and Die. The rapids Frankenstein, Pincushion, and Boof or Consequences, gave us a small idea of what’s to come. With clean lines through narrow slots, around potential pin spots, and must make tight boofs, we felt good about the day. 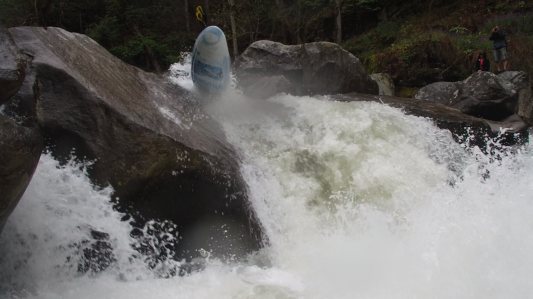 After a good warm up, we were there, standing on a big rock scouting Go Left. This is the first of the ‘Big Three’ and I wasn’t so sure about running it. After watching just about everyone flip over by the rock in the bottom center of the rapid, us first timers Sebastian Tosatto, Brody, and myself, decided we didn’t want to get smashed. So we ran the sneak line on the right.
On down all of us did great. Neither of us got stuck in Zwicks nor pinned on Chief. Brody was pretty convinced he’d be portaging Chief based on what he read, but changed his mind and ran it clean. He knew the risk of pinning on a nasty rock just underwater on Chief, but felt super confident and that paid off. After that was the next of the ‘Big Three’, Gorilla. This was the rapid that I have been wanting to run since I saw it in a video a year ago. 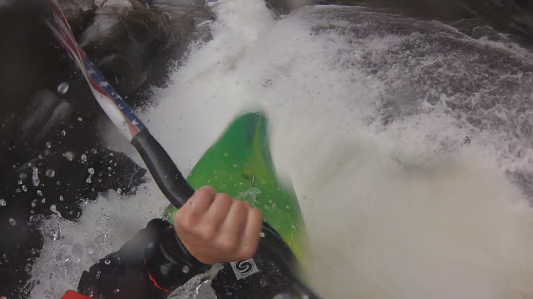 We took our time scouting Gorilla for it was a continuous rapid with five segments, Pencil Sharpener, The Notch, The Flume, Scream Machine, and Nies’ Pieces. After setting safety and watching just about everyone run it clean, including Brody, it was my turn. Up at the top I didn’t feel nervous really at all, probably because I felt confident that I could do it and I was super pumped. I shot over Pencil Sharpener perfectly but almost spun out after The Notch, but was able to catch the ‘Notch Eddy’ right above The Flume. My heart raced as I peeled out to the lip the biggest drop of this famous rapid. I boofed hard into the whiteout below. Once I could see again I was past ‘Speed Trap’, a hole at the bottom of The Flume. I was so stoked that I had run the rapid, but it wasn’t over yet, there were still two more slides. I styled both of them and at the bottom shouted with a fist pump. I had finally run what I had wanted to since forever ago. 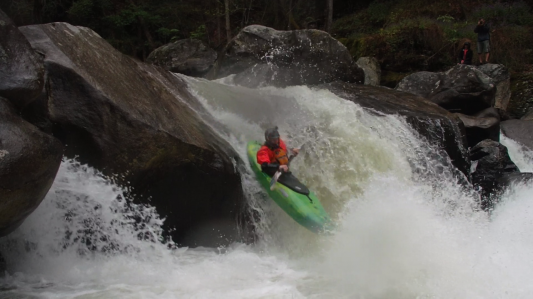 We all regrouped in an eddy below Nies’ Pieces and continued down the river. The next two rapids, before what is normally a mandatory portage, are two awesome slides. We all did them clean and without getting caught in any holes. After portaging, we put back in right above Groove Tube. This is a relatively clean 10 foot waterfall that is about 50 feet above the last of the ‘Big Three’, Sunshine. 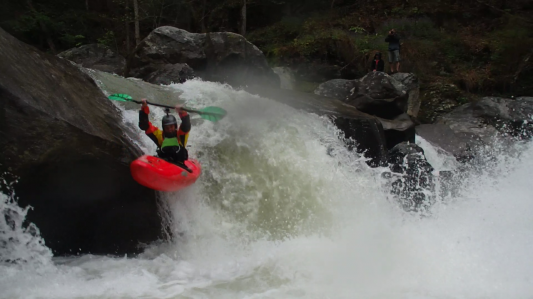 I was pretty nervous about Sunshine because I have heard stories about kayakers breaking their backs on the rocks below. Sunshine lands on sharp rocks in the center with a lot of force. The right and left sides are good but the landing zones are narrow. It looked easy but was really sketchy. I watched everyone do it first before deciding what I was going to do. Everyone did fine; Jeremy flipped at the bottom but rolled up before being pushed over rocks, and Sebastian who didn’t feel comfortable and walked it. I decided I could do it so I put in and caught the set up eddy. Peeling out I was very nervous, and when I spun out a foot before the lip, my heart stopped. I thought I was going to land on the rocks. But I took one really hard sweep stroke, an even harder boof stroke, and finally a late boof stroke to get my bow up, and I managed to run it with no consequences. I was pumped when I caught the eddy at the bottom. 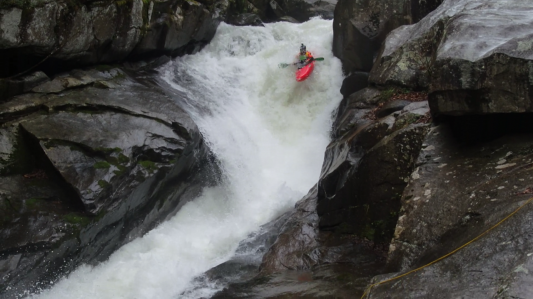 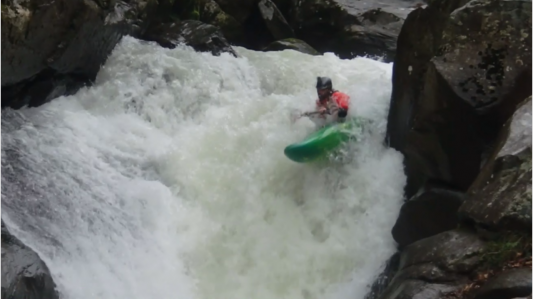 We continued down through the last rapids which were fun class IVs. After the hard drops I wasn’t nervous any more and wasn’t so focused on making my lines. I noticed how beautiful the river is down in the gorge. It was raining a little bit at the time and there was a light fog just above the water. It looked as if we were in a rainforest.
We finally got to the take out, and I could tell all of us were super stoked. The Green is a river where anyone can have bad and good days. Kayakers who have been running it for years get beat on rapids that are smaller, and some who walk the ‘Big Three’ run the whole river clean. It’s a magnificent run that will have you high on adrenaline for days. I am glad I finally got to run it, and I am thankful we did well. I thank Jeremy Adkins and Hunt Jennings for showing us the way, and I can’t wait for next time.

Here’s a video I put together of the trip: [youtube]http://www.youtube.com/watch?v=dEr8_UFGrm4[/youtube]