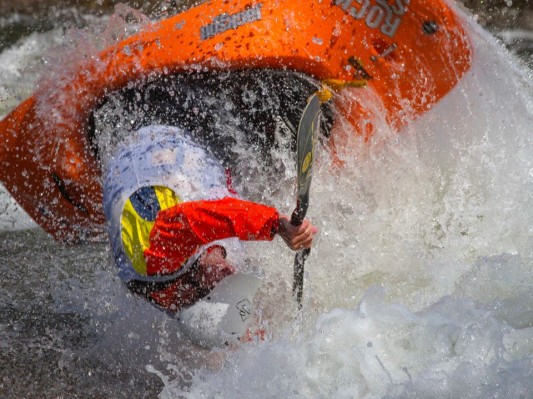 One of my favorite stops on the rodeo circuit the TVille Triple Crown never disappoints. The idea behind the event is to get kayakers to better understand all the different WW disciplines. We compete in Wildwater, Slalom and Freestyle, in that order, all in ONE day. Then after they tally how you do overall in all 3, they cut you to do it all again the next day.

Last year was the first year I had missed the event as I had Tucker (my son) only 4 days before the event. I was sad to miss it but had another amazing event to partake in. Andy Kuhlberg (organizer of the event) has worked so hard to improve every single year and each year the event seems to run smoother and smoother. This year we had everything running so smooth, we were finishing the events by 3!

The first event is Wildwater. Wildwater boats are something else all on their own. Paddling them goes against all things play boating. To turn right, you lean left, to turn left you lean hard right. Backwards and confusing. This year the race was a little longer due to the dam at the lower rapid being blown out. Causing there to be another great and swirly rapid. Day one I aced it and somehow kept my boat pointing the direction I wanted, day two not so much and it left me in second to Jessie Stone who had a great run. Courtney Kerin couldn’t quite figure out how to keep the boat tracking and did a lot of back and forth action. We applauded her for covering the most distance. Katelyn Green and Hailey Thompson also had great runs. Unfortunately the wildwater champion- Elaine Cambell wasn’t able to race the second day due to not gaining enough points after swimming on her wildwater run. Tricky boat plus a wing paddle left her wetter then she would have liked, but she still had a great attitude and paddled great in slalom and freestyle later that afternoon.  Dad and Danny battled both days on Wildwater with carbon c-1 king- Jordan Poffenburger  (who had been paddling lots of slalom recently). Nick sat behind them with unfortunate lines both days that caused him to be covering much more ground then the other competitors. Joe Potoczack and Jeff Belanger also had great wildwater runs with their carbon boats. Devin McEwan sat behind Jordan for the c-1 championships.  On the second day Danny took the top spot followed by EJ.

This brought us into Slalom where Dad and Danny again battled it out for the top spot. Dad went first, then Danny beat his time, followed by Dad beating Danny’s time and Danny just missing the top spot by only a second. Nick (who hasn’t done any slalom training) looked super fast and was only a few seconds off the top time. He was one of the very few people to have a 100% clean run and made the hardest gate look like cake. The c-1 slalom boys killed it but struggled with Gate 16, which was (including myself) the crux of the whole course. Several other athletes did a great job of running through the course but the hardest gate still killed all their times. Now Dad and Danny were tied for first. Nick and Jordan were right behind battling it out for third place. Nick had beat Jordan in Slalom but was behind Devin McEwan. One more event to go meant everything could change. In the Women’s I had two okay runs, not great but fast enough to put me on top. I had so much fun paddling my Slalom boat I didn’t want to stop, I could have done ten more laps just for fun. Hailey Thompson showed off her old slalom moves and Katelyn Green and Courtney improved every single lap. Jessie had a hard time with 16 and it cost her lead.

Last but not least (and my favorite) the freestyle event commenced. Up first was the women’s event and unlike most events, this was freestyle through the rapid. I did several moves through the wave train but spend most of my 60 seconds in the main hole- Babylon. Nothing felt greater then the big loops and space godzillas I was throwing. Slowly losing weight has allowed me to get more and more pop and it certainly feels good when the boat is out of the water. I got several moves after the buzzer that I haven’t done in forever- mcnasties and phonic’s monkeys. They felt fantastic and had lots of pop. Courtney Kerin was unable to establish a surf in the main hole and it cost her a ton of points. Jessie Stone managed to pull off some loop moves and a wave wheel. Katelyn Green tried to surf another feature but was unable to stick anything beyond her great wave wheel. Hailey Thompson won best beat down and impressed me with her enthusiasm throughout the whole day.

In the men’s freestyle the Rockstar helped a ton with its short length. Some of the local boaters including Devin and Joe struggled to keep off the bottom in their longer boats during freestyle. But still pulled off a few loops and cartwheel moves. Danny Stock wowed the crowd with his HUGE loops but didn’t have much else to rack up more points. He tried McNasties several times but never quite pulled them off. Jordan Poffenburger had all the moves just never in one ride, which cost him third place overall. He did pull off one of the biggest McNasties of the event and several Wu Trickies (reverse tricky woo’s). C-1ner Keith snapped his paddled and broke his outfitting so he had a rough competition but still had a great attitude. David Silk never quite got his down river mcnasty and it cost him lots of points. Dad and EJ battled throughout the 3 rides. Nick setting the bar high with a 880 on the first ride. Dad beating it out with a 910 followed by Nick with a 1010. It was fun to watch the air and scores climb. The crowd loved the competition and camaraderie. 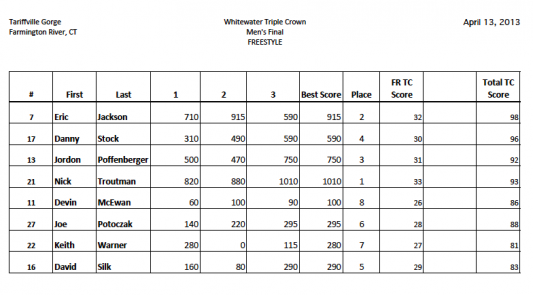 Tight as always Dad and I managed to take the top title, leaving us both with 4 T’Ville Triple Crown wins. Nick has one and Courtney Kerin has another.

(Sorry I don’t have the full results from Day 1- only the finals from Sunday!) Congrats to all the competitors for enduring the triple event!!

I cant wait for the opportunity to race gates and wildwater boats again! Big thanks to Andy Kuhlberg for putting on the event and being one of the few organizers who partakes in the event. He paddled super well and was a joy to be around even while running not one but two days of 3 events! Craziness! Paula and Dave were fantastic as always and held our boats on the starts. Thanks to Gary and Amy for the slalom course, sandwhiches, water, and constant support. The great couple who ran the slalom timing (I cant remember your names but I am super grateful for all you do!). David Su and Billy Hearn for being constant entertainment (almost swimming on the flatwater start in wild water) And Steve and Rick for all the great photos!

Such a great time visiting with friends and making new ones! So happy to spend time with Aunt Jessie and the Stock Family, cant wait till next year. If you think you want to try some other disciplines come join us in 2015. We will be there in full force! There are prizes down to third and the boat swaps are awesome!