With the spirit of the Olympic games still hanging in the air, the kayak anglers here in Hawaii have begun our own epic competition in the form of the annual Aquahunters Makahiki Tournament—but thankfully without all that snow and cold air. The Makahiki, put on by Aquahunters.com, is a grueling 8 month long points competition that will test one’s weather forecasting skills as much as angling prowess, due to the fact that you only have a certain number of days to claim over the course of the season. With 25 days to play with in the Rec division, where all first timers start out, you must choose your days wisely, hoping to avoid fishing the days of high wind or swell that can ruin your chances of bringing up fish. Each year’s top three Rec finishers, then move up to the Pro division, which allows 40 days to ‘claim’ each year and since most do not come close to using them all, one does not have to be so choosy.
Relying largely on the honor system for reporting your catch with pics and weights, the tournament is based on the Aquahunters forum founded by Isaac Brumaghim, which is THE source for information on catching big game fish from a kayak in Hawaii and beyond. As an example of how it works, the wind and waves at one of my favorite spots were down a few days ago, so I decided to log on to my tournament thread in the forums and ‘claim’ my first fishing day. To earn points, all I had to do was catch fish! Usually that’s much easier said than done, of course, but it turned out to be a great day for me with three onos (wahoo) making it into my fish box. Pelagic species (onos, tunas, mahimahi, etc) over 10 lbs are worth 25 points each, and each fish gets additional points assigned based on weight (mine were 15, 19, and 33 lbs) , so I was able to report a total of 100 points for my first day. 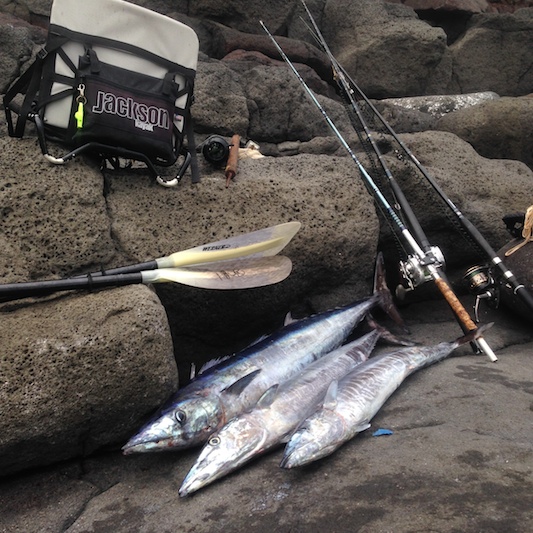 Most of our fish are caught for consumption, but a few species are given bonus points for catch and release as well. Two days later, I knew the action was still hot so I claimed Day 2 and went back to the same spot. I arrived to find other anglers sadly staring at a surprise swell that had moved in over night and shut down the launch. We decided to change spots, but it just wasn’t as active, and I ended up wasting a claimed day for 2 points on the day, releasing a strange but beautiful reef fish. So goes the fickle luck of a fisherman. 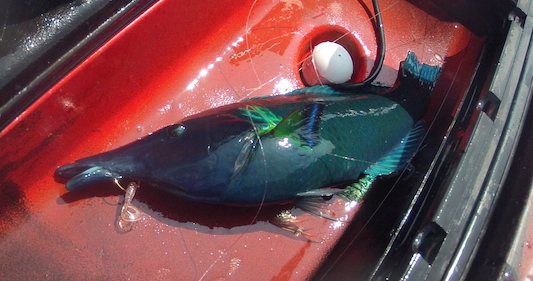 For myself, as with most who participate, the real value of this competition is how it has pushed me to improve my skills. Having a zero point day at the same spot where another angler has an 80 or 150 point day, makes it very clear that you are doing something wrong, and forces you to analyze the mistakes and make the necessary changes to get better results. I’m up against some of the top names in the sport- Andy Cho (5 time champion), Isaac Brumaghim, Rob Wong-Yuen, and last year’s champion Chris Paglinawan, so I’m generally just hoping to crack the top ten. This will be my fourth Makahiki, and third in the Pro division, but I didn’t do well last year and feel I still have a lot to learn. I’m looking forward to representing Jackson Kayak in another season of friendly competition with some of the best kayak anglers in the world.

The Makahiki runs from Feburary 1st to September 30th, with registration currently open until June 1st. To sign up, view competitors threads, or just learn more about kayak fishing in Hawaii, check out .