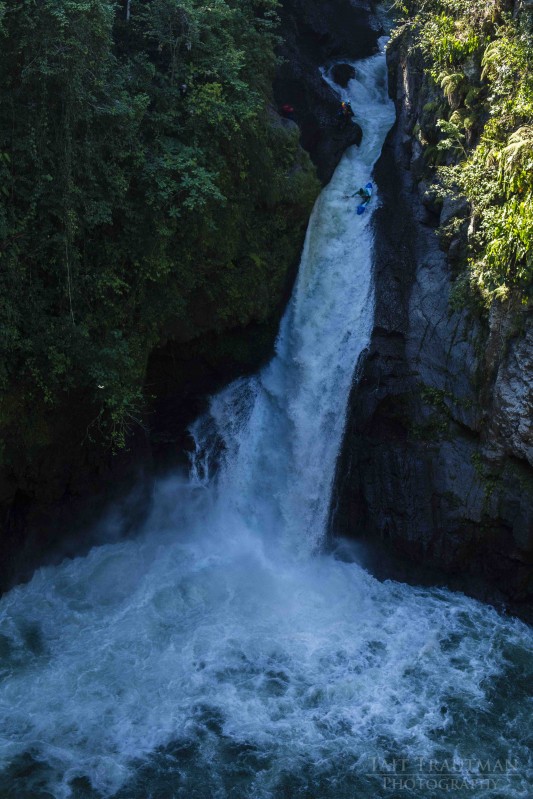 Tomata two is one of the stoutest big drops in the world. From pool to pool it is about 90 feet. The entrance rapid is 2 holes into a ferry through a notch. The second of the two holes is quite sticky especially at low water and has flipped plenty of “pro” kayakers. At the widest the entrance rapid is probably 6 feet, skinniest being about 4. As you go through the notch at the end of the entrance rapid it opens up to an 80-foot drop. The first 40 feet is sliding/bouncing with a huge curler on the right that wants you to be upside down. After the slide it kicks off into 40 feet of free fall.

The mental thought process of kayaking is like no other sport I can think of. This year I chased Tomata 2 with desperation I was starting to call stupid by the fourth run. I was so determined that I spent about 2 hours after I was trying to sleep wide-awake thinking about my line. Does this make me obsessive? Yes it probably does. However I have played many sports one person and team and I have never had the determination to do so well at one single part/drop of the sport. There is just something about big drops that calls me and forces me to battle with them until I come out victorious.

This year in Mexico I ran Tomata dos 4 times. The first time I over boofed it and folded my boat. Second time I flipped in the second hole and rolled up in time to go off the drop. Third time I ejected and pulled my meniscus in both of my knees making it very hard for me to walk and I may need surgery. The fourth and last time I ran it I was wondering weather it was pushing my luck way to far. It was a high water day and was pumping through fast. I ran it that day for 2 reasons. First is that TY had not run it yet and I wanted to run it with him. Second was that I could not fathom going home without sticking my line. I don’t know why I could not process it but it seemed that I would be in serious mental pain if I went home without sticking it. This is where pride comes in. kayaking is a very pride driven sport but there is very little judgment in kayaking. If I were to not run it that day people would think any less of me however, would I? No but I would have this nagging in my head until I stuck it. I have no idea where this comes from but it is there.

TY won roshambo and went first. He stuck it, one of the best lines I have ever seen off the drop. I followed him up almost completely numb to emotion by this time I charged in. I styled the entrance and hydro-planed right into the crack. I dropped right through the curler and popped out the other side. Slid down with a bit of angle and pulled my boat straight right at the end. I did not style it to my standards. Yes I plugged it, no I did not get hurt, but did I make it look super easy and steezy? No, and I still have the nagging in the back of my head that I need to go back and stick it.