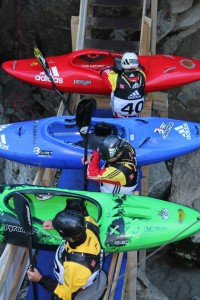 Well, the 2012 Sickline extreme World Championships has come and gone.  EJ, Dane and I all flew over to race at what I consider the hardest creek race ever. Some people may disagree with me, stating there are harder courses, which there are, but I think the combination of the short and technical course, and the extremely stiff field of paddlers I will stick to stating it is the hardest creek race ever.

This year we felt well equipped will 2 weeks on training, and the speedy ZEN for our race boats. This was my third year racing and the competition gets harder every year. Not only do more top racers show up, but more and more people are coming weeks ahead to get plenty of training runs in. I felt like I had plenty of training runs, with over 50 runs down the course. Though I don’t think anyone trained any harder than Dane, who had done every line possible about 100 times.

Between EJ, Dane and myself we all felt like we could do well in the race if not win. Though as many of you already know Sam Sutton was the winner, his 3rd win in a row actually. So what happened to us…

Well, to be frank, we all screwed up, actually we all made pretty much the same mistake.  “Champion’s killer”, that is the name of the final drop of the minute long course. It has lived up to it’s name several times, with the slightest mistake, boof stroke too early or too late and the race is lost; land pointing left or right and the race is lost. Actually if you do anything besides the perfect line it usually means your race is lost. Well, as you can probably figure out, that is where all three of us lost.  The irony is that it is the same mistake I made 3 years prior, and it is a move that I had dialed in and made over and over.

My race run was actually one of my best runs, everything felt smooth and was going fast, until my very last boof stroke which was a split second too late causing my bow to fly into the air and land flat into the eddy instead of shooting out and across the pool. I knew instantly that the race was over. 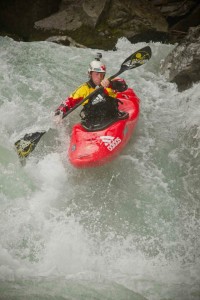 The beauty of the Sickline race is that it is so short, winning times in the mid 50 second range, this means any little minuscule mistake that costs 1 second, results in you loosing the race. Even though I lost, and didn’t have the race run I wanted, I still was happy to see my good friend Sam up on top. It just means another year to train up and get stronger, and for next year we will have to whole new secret weapon… the KARMA