Self-supporting the Lower Deschutes in a Jackson Rogue 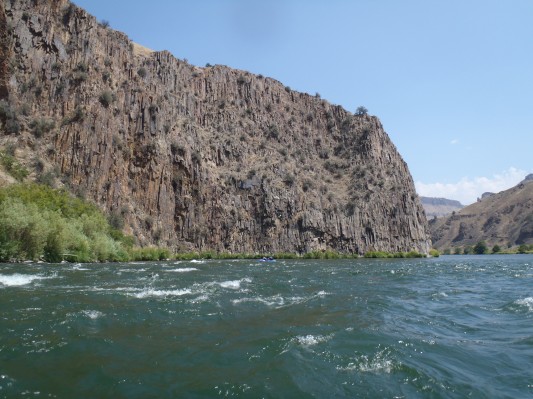 I was just a week away from leaving for my California family vacation and looking for a fun Oregon adventure to fill up the few days before I was due back in Seattle. A friend offhandedly mentioned running the Rogue river (and no, permits were not yet acquired and no, I was not invited), but the idea of doing a multi-day was borne.

First, I needed to find a partner in crime. Then I needed to plan out the details before leaving for CA just a few days later, with the trip less than two weeks away.

My new friend, Nat – who I only met once before the trip, would join me and paddle his Alpacka Raft. I would paddle my Jackson Rogue. We tried to scrounge a last minute permit for the Rogue river, but no dice. Our second choice was the Lower Deschutes, and we finally settled on running the upper section from Trout Creek to Sandy Beach. This is 43 miles in total, with 3 nights camped out on the river… in other words, a very slow and relaxed pace.

Within a couple of days and numerous emails, we figured out the details like picking a rendezvous point in Portland, securing the permit, aprroximate get-on and get-off times, booking a shuttle, finding a kennel for my dog, and other important details. And away to California I went… 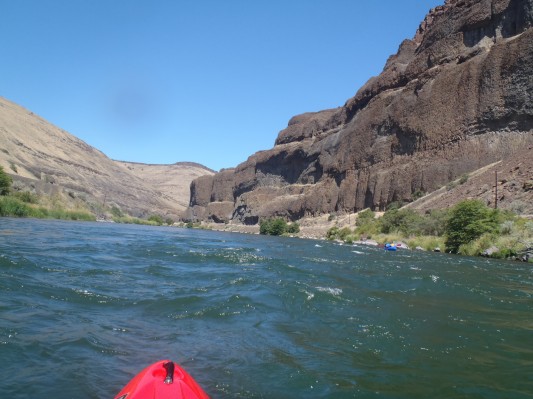 And back to Oregon I came… we met up at a campground and made our way east to the put in in the morning after dropping my pooch off at the “doggie resort.”

The Lower Deschutes is a fantastic multi-day option, especially for a first time self-supporter that is at an intermediate level. Here are a few reasons why:
– It’s beautiful, sunny, and warm (and that means less stuff to pack).
– It’s easy to get a permit, even on short notice.
– It’s a relatively mellow river, with some fun class IIs and IIIs and only one, easily portaged class IV.
– It’s not THAT remote. There are roads. There are toilets at most of the camping spots (you probably won’t use your groover at all). You even go through a crowded city park at one point.
– There’s good wildlife viewing: osprey, various birds, snakes, racoons, and we think we saw wild horses. Sadly, I did not get to see a scorpion. 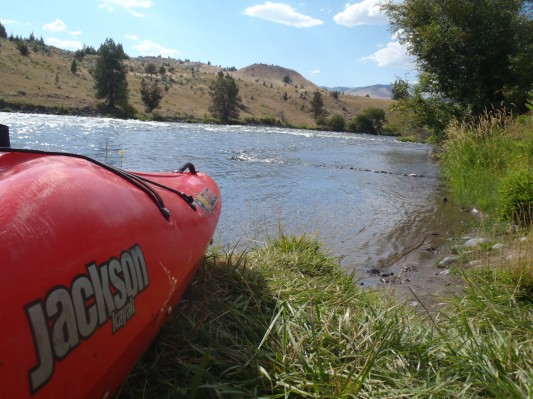 OK, those are some of the reasons that make it an awesome trip. But, I absolutely must talk about the weirdness of it all. You’re out in this remote place, but there are a lot of trains going by, which is especially awesome at 3am. At one campsite, there was a nearby road, so you would occassionally hear a random car pass by. Now, I guess this isn’t that bad, but when your other trips have been a bit more isolated from civilation… well, it’s just plain odd.

Once you get to Harpham Flats, the river is a popular day run, and there are a lot of rafters. You pass by the Maupin city park, which is also… strange. Here, we scored some cold beer from some rafters. Then, we made our way to a restaurant for some cheeseburgers which were delicious.

From here to the take out, the good majority of the campsites are crowded fee sites, where the users have driven in for some car camping. Luckily, Nat found us another spot.

I definitely enjoyed paddling my Rogue on this river. I once again had ample space for everything I needed. In fact, the boat felt kind of empty on this trip, and my stern was only half full. Now if I could just figure out how to pack a ukulele in there, I’d be set.

All in all, it was an awesome trip. I think we both could have gone for a few more rapids along the way, but we were happy with what we had nonetheless.

See you on the river!