With thousands of pounds of equipment to carry down the back woods trails of Rock Island’s falls section, the preparations for the 10 am start began at twilight.  The gang from NOC brought in their new scoring system and had it all ready to go just in time.  With the mist from the incredible falls playing havoc on computer screens, the boyz got the system charged up and eager to receive the scores.  As the morning progressed the crowds began to make their way to the park, to the heat sheets and to the rocks, setting up for a classic showdown of 17 countries and over 130 athletes.

The morning heats began with some of the classic names in freestyle:  Jackson, Csonka, Kirk, Chapel, the experienced Japanese, The Wright not-so-brothers and a heavy Euro contingent.  The wave was the big story this morning as its retention was good, but if you flushed there was no chance at any meaningful points if you try to attain again.  The hole opened the book on the entire gammot of moves, entry, loops, blunts, and combos were possible, but the risk sometimes was high.  Those who kept technical, focused and didn’t back down on their recovery strokes tended to keep in the hole and rack up the points.

In the early heats the Jackson clan and local boaters all showed the advantage of knowing how to work the wave.  Points got as high as 789 from Bartosz who surprised many with a dynamic ride taking the early lead.   Dane Jackson had an unfortunate flush the second ride and made his attain from the far side, river left, behind the falls.  He recovered nicely with a total of 1002.  Spectacular seeing him pop out of the falls and onto the wave for an extra few points.  By the middle of the morning, there were clear leading rides with EJ and his 941, Dane and Bartosz leading the way.  The last two heats brought together quite the gang of champions,  Canada’s Nick Troutman and Canada’s current champion Adam Chappel joined veterans Clay Wright, and Brian Kirk for a cool 2-heat showdown destined to entertain the crowds.  They did not disappoint as that last two heats shook up the top 10 in an instant of full 45  second rides (a rarity today).

When the mist/dust settled, it was Nick Troutman at the top with a ride combine of 1260, Dane staying in with uis 1002, EJ in third, Bartosz in fourth and Bryan Kirk in fifth. Top three performed in the new 2013 All Star or Star.  Full results below.  The top 20 make it to the quarter-finals.

This afternoon the women’s K1 heats begin in earnest with no break as the water here is on only till 5 or 6.  The new NOC scoring system seems to be heading the right way with Head Judge Peter presiding over the judging crew at the wheel, knoding his head as one of the first paperless systems ever used gets its tires kicked.  This system is awesome! 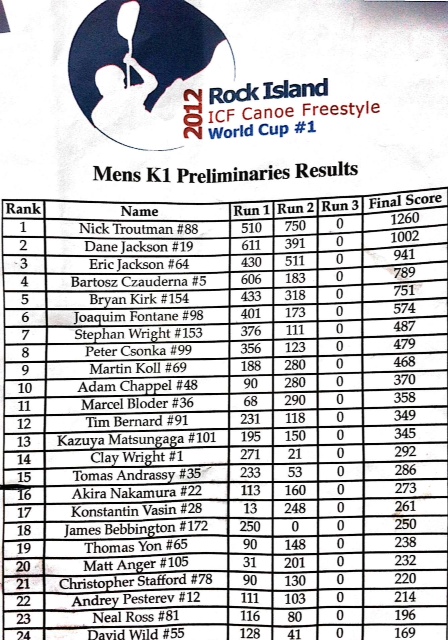 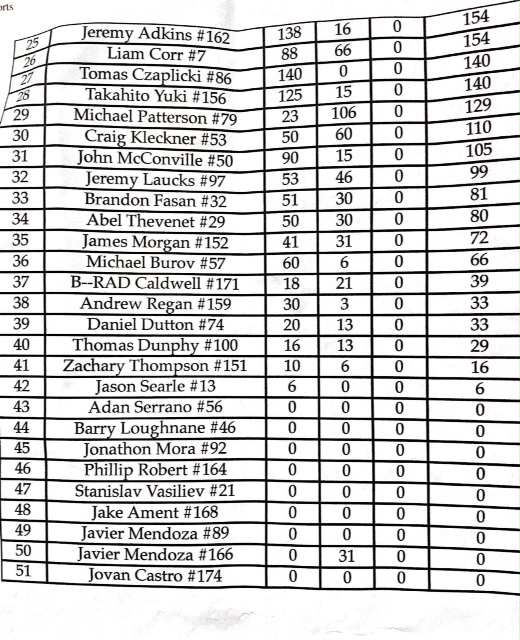