A fellow kayak angler from Georgia and I headed down to Titusville, Fl. for the Regional IFA (Inshore Fishing Association) Kayak Tour Event.  We arrived in Titusville around 7pm on Thursday and checked into the room, we made some phone calls, checked out some maps, and got our tackle and game plan ready for the next day. Got up early Friday and hit the Banana River (No Motor Zone). We fished probably a 10 square mile area catching trout right off the bat and trying to figure out where to fish. The trout were small but fun on top water lures. We fished near the mangroves in the shallows and saw a few fish. Later on Kevin finds the trough that runs through the area and gets into some trout and small Jack Crevalle.  At one point we were fishing a few hundred yards apart and he calls me and says he just caught a monster redfish. I paddle over and saw that he caught a toad of a red, measuring 32″. We played with a few more trout in that area and then called it a day due to the winds blowing even harder than they were blowing already. 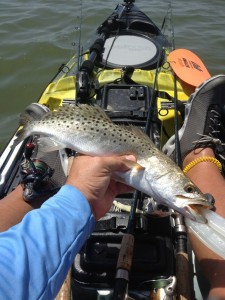 We got up Saturday morning and fished the upper Indian River lagoon with some friends from Jacksonville and Charleston. The water was dirty and there was grass everywhere (they say that they have had a bad algae bloom lately). We had several trout blowups at top water baits, but never hooked up. I ended up seeing a red in really shallow water just sitting there. I tossed my lure and popped it by him; he did a 180 degree turn and ate it. He put up a fun fight and measured about 22″.
We got off the water and did some scouting, but due to the rain storms we didn’t get back on the water. One of our friends caught a 30″ trout while scouting in the Mosquito lagoon that afternoon. That same angler had caught a 37″ red the previous day.
We planned and plotted that evening, probably over analyzing and over thinking our whole plan, but that’s how it goes in an unfamiliar area and tournament fishing.
Tournament morning we launched on the west side of the Mosquito lagoon and planned to fish behind some barrier islands to stay somewhat protected from the winds and rain storms of Tropical Storm Isaac. We saw bait everywhere and yes, the grass was carpet thick there too. I ended up catching a 16″ redfish early on, but never got another fish. I have to admit, he was a good looking fish. He was real bronze colored with a nice spot on his tail. 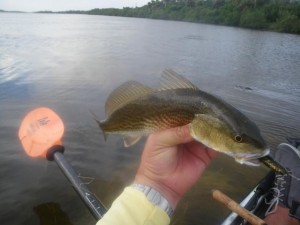 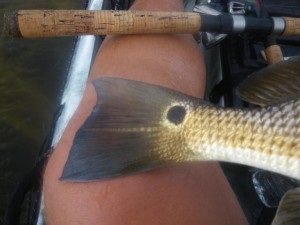 A couple of our guys caught mid twenty inch reds, but nothing else. Going back to the ramp, Kevin and I were near some Manatees and saw a tarpon (about 100 lbs.) jump completely out of the water over one of the sea cows. We were only about 20 yards from it and yes, we threw baits that way in hopes of getting broke off after a powerful sleigh ride. It didn’t work out, but it was the effort. 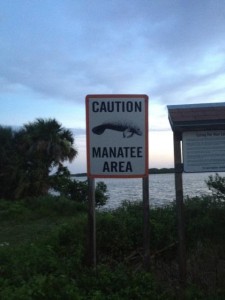 It was a great trip and a great learning experience despite the bad weather and algae bloom in the Northern areas. I plan to go back during the winter for some pig redfish in the Banana River.
We saw more Manatees in our 3 day trip than we’ll ever see in Coastal Georgia!  Congrats to the top finishers, especially the ones that caught both species (redfish and trout) in the rough conditions.

Despite the high winds, my Jackson Kayak Cuda withstood the waves and chops with great stability.  If it weren’t for the rain, I would have never gotten wet from the rough conditions.  That JK seat is awesome!