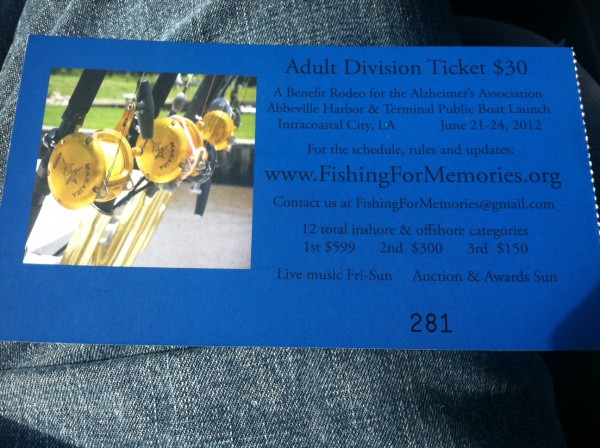 Earlier in the year Drew Gregory and I had a conversation about Google alerts and how he uses them to inform him of specific things that he’s interested in.   Last month I remembered that conversation and decided to set up a few alerts of my own.  I’ve been trying to figure out how to stay on top of upcoming local tournaments and this seems to be the best way.  A day after I set up the alert “Louisiana Fishing Tournament” my email was hit with a bunch of local tournaments that I knew nothing about.  There was one in particular that really caught my attention, Fishing for Memories.

“Fishing for memories is a three day fishing rodeo that began in 2009 after event organizers Carrick and Holly Boffy decided to bring the family fun of a fishing rodeo back to Intracoastal City, Louisiana.  Carrick Boffy grew up enjoying the Kiwanis Tarpon Rodeo held at the same location from the 1950’s – 1990’s.  The Boffys selected the Alzheimer’s Association as the rodeo’s beneficiary because Maxie Pierce, Carrick’s grandfather, died of the disease.”

After reading over the rules I saw nothing that would exclude a kayak from participating, but I sent an email to the contact address to make sure.  Shortly thereafter I received a response saying that I would be allowed to compete in my kayak.

Being that I found out about this event a few days before the start I could only squeeze in one day to fish it.  I fished Lake Calcasieu in one of my favorite holes but unlike the week before the water was really stained and the water level was a bit higher. I managed to catch some nice speckled trout in the 2 – 3 pound range, not heavy enough to take over one of the top three spots on the leader board.  I also caught a few flounder, one which weighed in at 2.4 lbs and allowed me to take over second place for a while.  I was really surprised that I didn’t catch any redfish in this location; it’s usually a good spot that produces chunky reds just under the 27” mark.  After the final day I placed 6th in the flounder division.

The weigh-in was in Intracoastal City at the landing next to Maxie Pierce’s Grocery.  I arrived to the sound of music playing, folks sitting in chairs enjoying the beautiful weather, and kids running around having a good time; the goal of bringing family fun back to the area was clearly visible.

If you plan to be in Louisiana or if you’re a local angler mark your calendars, Fishing for Memories 2013 will be held Thursday, June 20th – Sunday, June 23rd.