Arriving a day prior to the tournament day, I pre-fished an area that I had never fished before.  I was able to locate several nice schools of over slot redfish cruising the flats at the lower end of the tide.  I was unable to get them to eat any of the lures that I had to offer.  I also tried for some trout, but couldn’t locate them.  Even though the fishing wasn’t great for the day, I felt confident in the area and decided that I would fish the same area on tournament day.

At the Captain’s meeting that evening we received the normal do’s and don’ts for the tournament.  Many of the anglers came from out of town; from Florida, Georgia, North Carolina, and Virginia.  The majority of us are friends and spent time talking and catching up.  Several folks were talking about the Jackson Cuda and Big Tuna, saying good things about the layout and design of the kayaks.

The next morning came too soon and we launched at the prescribed time with hopes of catching the winning fish.  The format is catch, photo, and release of the biggest redfish and speckled trout that you can catch.  The largest aggregate measurement is the winner.

We had a high tide in the morning and I searched the grass flats looking for open areas in hopes of finding some feeding redfish.  The game plan worked out and I began to see redfish tails waving in the shallows.  The first spot had 4 nice sized fish feeding, but none would take my lure and after plunking one in the head on a cast the whole pod scattered.

The next spot was even better with around 7 large tails visible.  I couldn’t get any of the bigger fish to eat, but did manage to hook into the runt of the group.  This fish was about 10 yards in front of me and as he passed my lure, I jiggled it and he did a 180 degree spin and ate it.  After a few minutes of drag screaming and adrenaline dumping moments, I landed the 27” redfish.  I conducted my CPR (catch, photo, and release) and released him. 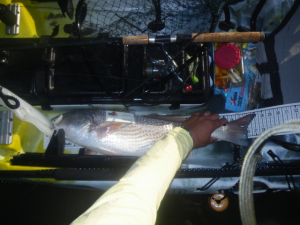 I began my search for a legal trout.  After paddling and fishing a few miles, I ended up at a spot that yielded three 10” trout and nothing else.  I paddled and fished some other areas with no trout.  I ended up back at my first trout spot with hopes of catching that legal trout.  My first cast I hooked into something that pulled about 30 yards of line out going south down the ICW, he turned around and headed back north and turned a corner into a creek and sat at the bottom of a hole.  By now, my heart was pumping hard, knowing that this fish was bigger than the 27” redfish I had caught earlier.  After a few seconds, the fish went into the middle of the creek and pulled me in the path of a few boaters.  Thankfully he moved towards shore after about 50 yards.  I finally landed the fish and measured a 29” redfish. 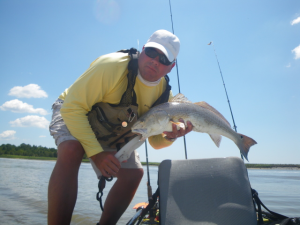 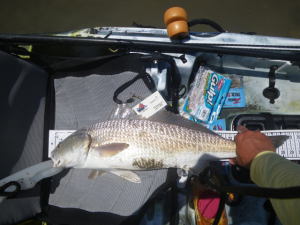 I continued my search for a trout with no luck.

At the IFA check-in, we hydrated and talked with other competitors while waiting for the results to come out.  I ended up coming in 5th place out of 37 anglers.

As usual, I had a great time fishing a IFA Kayak Tour event and can’t wait to represent Jackson Kayak in the Titusville, Fl. Regional qualifier.