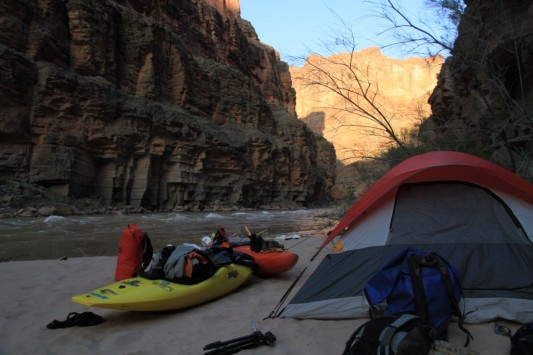 Clair is currently living in Reno and boating with our local comunity. She just got off the Grand and I was super staoked to hear that she took the Fun Runner as her boat of choice for the trip. Here is what Claire had to say about the Fun Runner on her trip.

I’ve recently been lucky enough to take one of the New Jackson Fun Runners for the best test run ever.
8 weeks ago I was sat at home in the UK pondering over the big dilemma of the day! A great dilemma but a dilemma all the same! In just under 2 weeks I would be flying out the USA to paddle the Grand Canyon and I had no idea which boat to take. I had spoken to friends who had been before and the consensus from them was all the same. ‘You want a river play boat, something that will paddle really well on the big white water, be fast enough and fun enough to catch and surf the big water waves and will be light, fast and easy to paddle on the flat water days!’

Luckily for me this decision coincided with the release of two new Jackson boats over in the UK; the Zen and the Fun Runner. I took them both out for a test run at the National Watersports Centre in Nottingham, the closest thing I could find to the Grand Canyon in the UK at the time. The 18 c/m/s 500m Grade 3 man made white water course in the heart of the beautiful world renowned city of Nottingham! had so many similarities (cough cough!) to the 15,000 cfs 282 miles grade 1 -10 Grand Canyon in the desert, one of the 7 wonders of the world! It was the perfect pre trip testing ground!
I jumped in the Zen first and loved it. It handled well, surfed and spun well especially for a river running boat and felt great. But then I jumped in the Fun Runner and instantly new that this was the boat for the trip. Super comfy (essential for a 19 day trip). Really fast on the flat and on the fluffy stuff. Loose through the rapids, tracking and holding its line really well, changing speeds on demand, carrying momentum and direction in and out of the eddies. And, most importantly for me, picking up every wave perfectly responding as requested to every move gliding, spinning, surfing and cruising around. The boat just felt great.

It had been almost 6 years since I last choose to paddle a river play boat on a trip, with more recent trend being for 2 boats (1 for creek and 1 for play), but instantly this boat felt right. It was great to be back to the world of ‘one boat does it all’.

I can defiantly say that the decision was 100% right. The Fun Runner didn’t disappoint when I got it in the Grand Canyon. From the boily mess that was the flat-water days to the steep, fast, big water grade 10 (Grand Canyons own unique grading system 1 – 10 instead of 1 – 4+/5). The boat handled like a dream. I surfed some of the biggest, steepest waves I’ve ever seen and some of the smoothest perfect smaller (1 foot high several feet wide) glassy, green waves. I didn’t try any of the big air modern day high scoring tricks that I would normally be trying in my play boat not because they wouldn’t go, I am sure with the right person in the boat they would, but mainly because I didn’t need too. The amount of fun that could be had from just surfing and spinning around in this boat was just insane. A few times I found myself being left behind as the group pushed on down the river as I tore up and cruised from wave to wave. And river running wise… it was perfect. It cut through the rapid effortlessly, tracking and holding lines, manovering around, over, under, through everything it met smoothly even on the more technical lines. Punching through even the biggest holes and wave it was just lovely and it rolled like a dream.

During the trip everyone (5ft -6ft4, 8 – 15 stone) had chance to jump in it and the responses were always the same. The bigger lads could tail squirt, blunt and ender the ‘60’ play boating their way down the rapids and eddy lines and the smaller paddlers in the ‘60’ and the bigger paddlers in the ‘70’ just all round loved it on the rapids, flat water and waves.

I would defiantly recommend anyone who wants a really great all round boat to try it out.
And if you do just so happen to get chance to test it out on the Grand Canyon I highly recommend that you run the right to left line on Lava and surf the 1 foot perfectly glassy wave on river right at about 85 miles on day 6, it is the perfect testing ground. 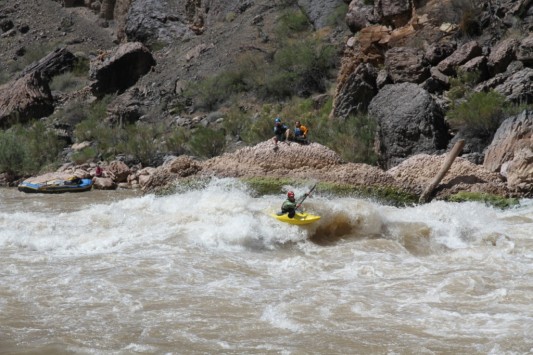 Photo Credit for both shots to Anna Pimpelle