Testing out the Big Tuna prototype in the Keys! 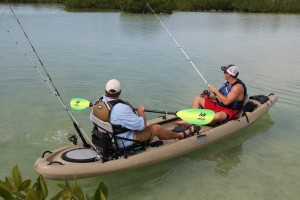 When working with the Jackson Kayak team in the concept phase of this kayak, we imagined it in places like the Florida Keys.  So, it only made sense to take a prototype of the Big Tuna to the Keys to do the first real Big Tuna review and get some cool marketing shots.

Fellow team member Brooks Beatty, our southeastern sales rep Dave Blanding, and I headed down to see what we could learn about the boat in preparation and anticipation of the production mold which is expected to arrive within just a few weeks.  We met up with Eric Hughes, one of our GA based dealers (Tallapoosa Paddling Company) who spends some of his winter in the Keys, and he even had some killer white Cudas made just for this clear, tropical beachy environment.  He also turned us onto Randy Morrow, who, as far as I know, is the only kayak fishing guide in the Keys.  Both of these guys were a blast to be around and we all learned so much from them about the fishing in the Keys and the ecosystem as a whole.  It is a completely different world down there and one that can be very difficult fishing-wise, but yet you don’t even mind because the scenery is so spectacular.  However, stick with it and you’ll see that you can catch fish here, and nice ones!  The weather didn’t fully cooperate, which is crucial in Keys flats fishing, but we did catch some fish and accomplish our main goal of really putting the Big Tuna to test, and we loved it!

I spent most of the entire time in the boat, both solo and tandem (with Brooks) and in both scenarios it was a true joy to fish from.  In the tandem position, like any tandem, we had to communicate well and utilize teamwork to get things done.  The boat was plenty stable with two people and Brooks and I could even both stand and fish from it.  I’m not sure everyone could do this, but both being kayak fishing veterans it wasn’t too hard for us.  We also enjoyed soaking some live and cut bait while in the “face-time seating” position, and getting to hang out and have some good conversation while we waited for the fish to bite.  Brooks even mentioned “I really like how in this boat you get to have a conversation with the person you’re fishing with” because sometimes when we are in our solo boats we tend to drift away and lose touch for most of the day.  That is fine of course and I love the peace of being alone, but it was nice when fishing with bait (which can be boring at times while you’re waiting on a bite) to have someone to laugh with about everything under the sun that came to our minds.  During a photos shoot we had Eric and Brooks in the boat (combined weight 400lbs + about 50lbs of gear = 450lbs) and it performed exceptionally well under such a weight capacity as well.

The “Tuna Tank” (live bait well) also performed very well and I selfishly wanted to use the Big Tuna on days where we split up solo just because it was SO EASY to just put my boat in the water and then dump my bait into and paddle off to catch the fish – no electricity or plumbing required on this bait tank.  Even with just myself in the boat (all 155lbs) there was about 3 gallons of water in the tank, which was plenty to keep 2 dozen shrimp and several crabs happy and spry until their number was called!  With the Tuna Tank using water from below the kayak to circulate through the tank it allowed the bait to essentially be getting all the oxygen from the entire ocean below.  They were the liveliest bait could possibly be.  Plus, I loved the fact that the bait tank was in front of me so I didn’t have to awkwardly reach behind me (like everyone else) to try to pull my bait out of a bait bucket.  To top it off because the bait well is in front of me it allows the water inside it to be in a location that doesn’t cause my boat to trim improperly like having 40lbs of water from a tankwell bait tank will do.

The boat solo was a blast to paddle and actually went a lot faster than I thought it would, given its super stable 34-inch beam and 14 ft length.  The stability when using the boat solo is extremely stable as one would imagine with such width.  For anyone who is looking for a great “big guy” solo boat, you definitely need to check this one out.  I was even standing on the gunnels to get extra height (may not want to try this) so I could spot fish on the flats and it was rock solid!  Eric also used it solo on the last day and he fell in love with it and said, “This is going to be my new favorite boat down here on the flats.”

The only thing this trip was missing was the fact that our glass bottom boat insert wasn’t quite ready for us to test out, and that is definitely an accessory meant for the Keys!  Oh well, I guess that just means that another Keys trip must be set for the future so we can test that out too!  😉

I can’t wait for all the consumers to get this boat and put it to good use this season because I think you may be won over by the Jackson Kayak Big Tuna the way I was on this trip!